Green Onion landscaping began this landscaping project by breaking out the old concrete drive, taking up the old paving stones and digging out the old gravelled area. A  dolomite base was then put in ready for the new driveway to be laid.

Green Onion Landscaping  put a ‘soldier course’ edging in using charcoal block paving and seated in two manhole recesses on a concrete mix. After that the Green Onion team sanded, compacted and screeded level the whole drive. We did this section by section. When each section was levelled, we laid the herringbone block paving using string lines to keep the block paving straight. This is essential when laying any paving of any kind.

Once the main body of paving was laid, the team began cutting the edges in using a stone cutter and sanded in the entire drive way area with kiln dried sand.

“The new block paved driveway looks marvellous. It really sets the house off and looks so much neater than what we had before. The herringbone block paving pattern is very smart. I wouldn’t hesitate to recommend Green Onion Landscaping to anybody looking to get some block paving done.” 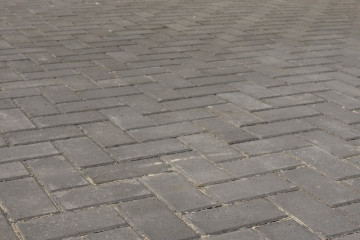